It’s not Arizona’s fault that our time there was short. In fairness, Rogue Trip was originally planned to reach California by way of Las Vegas, skipping ‘Zona entirely. But then, we found out there were some good folks in our network who were eager to let us take advantage of their domiciles, and considering Odie’s A/C issue, who are we to turn down the luxurious indoors? If it’s good enough for dogs, surely it’s good enough for us.

And with that, we turned our cheeks to Vegas and turned the wheel to Page, Arizona.

What’s it like to drive through the Southwest in late April without air conditioning? This Rube Goldberg situation below sheds some light: 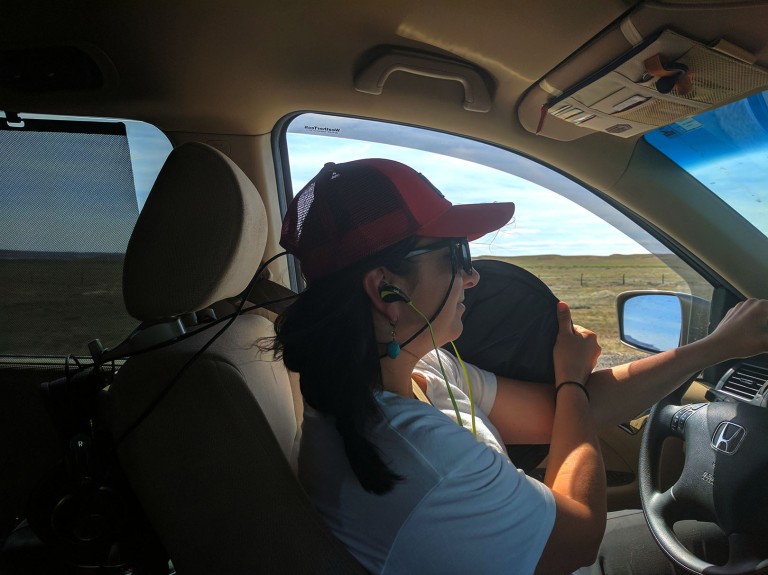 Obviously you need the windows open, so that’s Step 1. But opening the windows means you have to soak up all those unfiltered UV rays, so those need to be blocked by the car’s sun visor, and your baseball cap. But the open windows create some gargantuan crosswinds, so you have to anchor your baseball cap somehow so it doesn’t fly away. In this case, Hailey’s hat is tied to the seat using the cord from Mitch’s headphones. Hailey’s headphones are busy being used as actual headphones, because she can’t hear her audiobooks over the deafening wind buffets. On the plus side, driving like this means she also can’t hear Mitch complaining about her choice of audiobooks.

For the record, we aren’t broke and Odie’s A/C isn’t terminally ill. We’re just too lazy and forgetful to get the damned thing fixed. Don’t cry for us.

There are two world-class trails at Utah’s Zion National Park that we didn’t pursue because they were closed due to flooding. The flooding of these trails is particularly problematic because the trails you walk are basically streams weaving through slot canyon floors. In other words, if it floods, and you’re in there, you’ll be underwater, and you’ll die, and your granola bars will get all mushy.

Of course, that water is responsible for carving the canyon walls over thousands of years and thus, is the reason such trails are so beautiful. Different rocks change how the water flows, and that symbiotic relationship gets you different visual results from canyon to canyon. We give you all this boring geological background because it’s the only way you’ll understand that Arizona’s Antelope Canyon is a real place: 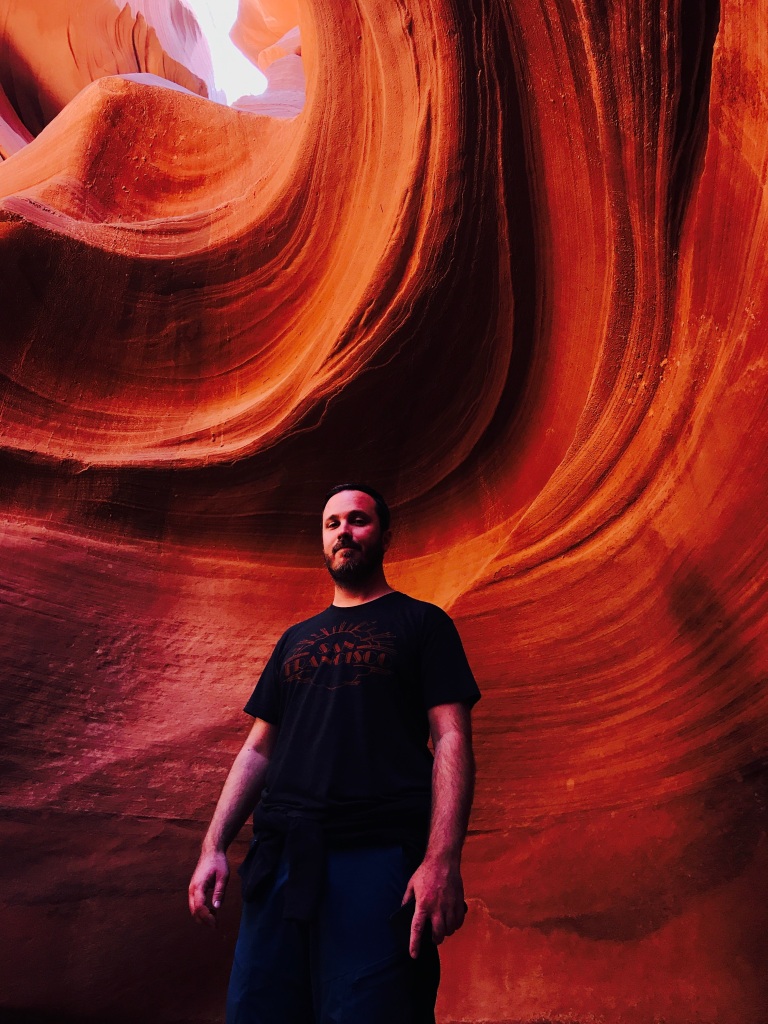 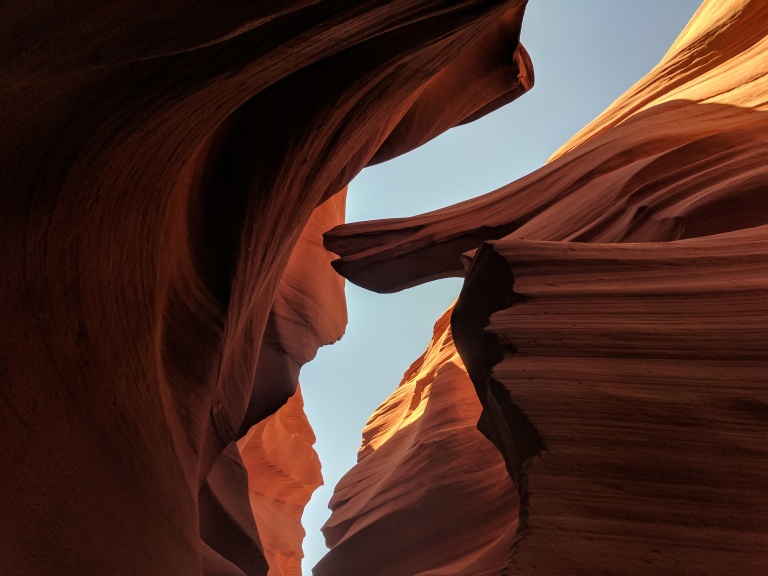 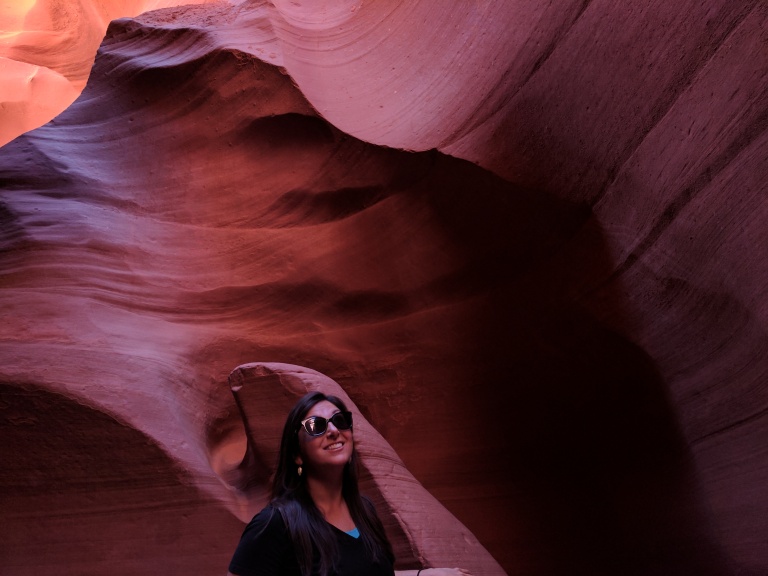 We’re down in an ancient riverbed, looking up through this A-shaped slot canyon at what would be the surface of the river. Does it all make sense now? No? Good.

Another section of Antelope is V-shaped, so you could do two tours and get two unique experiences. There are other canyons near Antelope with similar beauty to behold, and in retrospect, you might do well to seek those out: even on a weekday, Antelope was packed with foreign tourists and it was difficult to escape the herded cattle vibe, perpetuated by the Navajo guides (whose land you’re on, by the way.)

All in all, it is an unmistakable tourist trap, but one you have to do. Unless, as previously mentioned, you get lucky and find another canyon… but then again, all these canyons still pose the threat of mushing up your granola bars, so those who fear death might enjoy the tourist-friendly angle.

Speaking of fearing death, here’s yet another classic Hailey moment, leaned over the ledge to get the photo that 75 other people further back wish they’d gotten.

Let’s see the fruits of her labor:

We never found out why they call it Horseshoe Bend. Maybe we should’ve asked the nuns.

Our future selves will tell you there are a couple of places in this great nation that are probably most impressive without any context. But at this point, having just driven through the immense and dynamic rock formations of Utah, our present selves will tell you Grand Canyon is the first of such places. 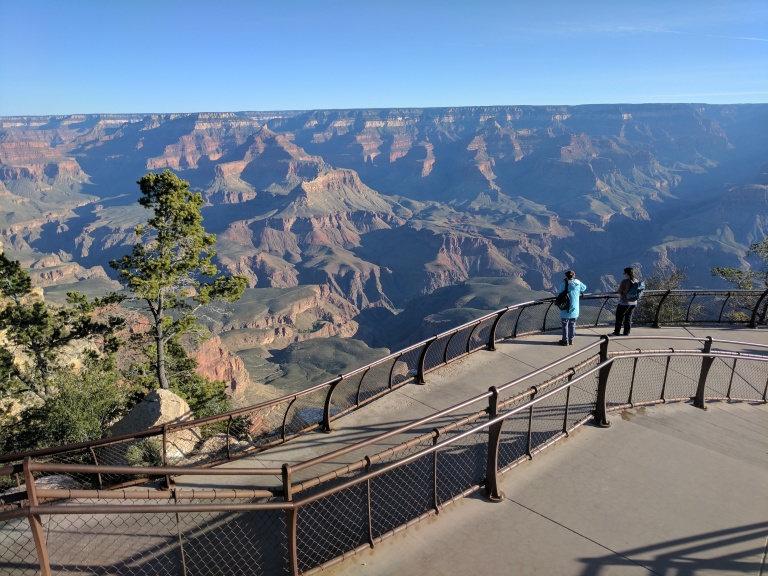 Sure, it’s huge. But arguably too huge to appreciate for what it is. It’s more like the general scenery of Utah, which you take in as the overall landscape, not a specific thing. When someone tells you the Grand Canyon is ten miles wide, you think, “well… is that even a canyon anymore?” And then you look across and think, “that’s not ten miles.” It’s too big to be in awe of, and that’s our fault, but it’s also our reality. Just calling it like we see it.

What we’d recommend — without any personal experience, mind you — is getting a different perspective of the canyon by doing a river rafting trip, or taking a mule ride down to the bottom. By the way, the wait list on that mule ride is like, a year long.

Side note: we will continue to harp on the fact that people ruin everything. The pic above shows Hailey observing the canyon at 6:30am. The woman in blue next to her? Total stranger. That’s where she chose to stand, of all the places on the otherwise empty observation platform. People are the worst animals, hands down.

Au contraire, when you don’t have people, the cool stuff happens. Like this elk just moseying down the sidewalk. If we weren’t there, who knows… perhaps it would’ve been dancing, or whittling a miniature wooden version of an elk. 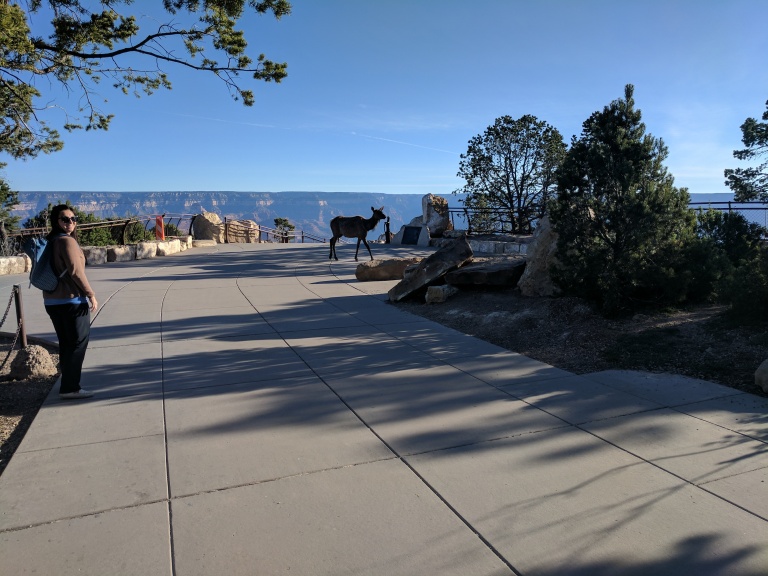 We did finish strong at Grand Canyon with a midnight stargazing program, narrated by a really good park ranger who commanded some ungodly flashlight that could reach miles into the atmosphere with insane precision. He said he could lose his job if he ever shined the light at a plane. We can build flashlights like these, but we can’t microwave our popcorn without burning it? The world makes less sense every day.

Driving south towards civilization, the first real town we’d seen in a while was Flagstaff — home of Northern Arizona University. Having spent a month out in fairly desolate natural surroundings, the urban scene of Flagstaff was rather unnerving. We needed to get back in the groove as members of society, which naturally meant eating pizza.

Hailey said she’d never tried Chicago-style pizza before, to which Mitch exclaimed, “well then, you’ve come to the right place! Arizona!” Inexplicably, they actually did have a Chicago-style pizza joint there, named Oregano’s. All the hip kids were there. We each ordered a personal pie, both of which were mistakes. Here’s a snapshot of the point where we decided to box the stuff up.

We walked out, pizza boxes in-hand, and immediately realized we had no use for these leftovers. Hailey decided she was going to donate them to some college kids in need. Want to hazard a guess as to how long it took for us to pawn these pies off on some local students? It’s less than whatever you guessed.

First intersection we stop at:

Hailey: “do you guys want some free –“
College dudes: “YES” (sprints into traffic to take whatever we’re offering)

In other news, the Northern Arizona University cops get our Rogue Trip stamp of approval. We parked in a permit-only lot and came back to a mere warning ticket. Not that we’re special, since the Warning number reads #17,200,402,448. Apparently all seven billion people on earth have gotten at least one warning from NAU police at some point in their lives.

Sedona is a fun little town with some great scenery, and in the midst of our sweaty drive across the desert, we were happy to find this attraction in particular: Slide Rock State Park.

Yep, that’s a (mostly) naturally occurring waterslide in the middle of a riverbed. We watched all the little kids get their little concussions on said rocks while the parents drank beer and sunbathed.

Sedona’s town center itself is super-touristy, though it does make a decent romantic attempt with its adobe-style facades and WHAT IN GOD’S NAME IS THAT TEAL MCDONALD’S DOING

You went too far, Sedona.

One side trip we’d recommend if you’re around Sedona is the Out Of Africa Wildlife Safari. I mean, if you need any convincing that the southwestern U.S. is an unforgiving land, the fact that they were able to create a miniature Africa here by simply putting up a perimeter fence should clue you in.

And what do you get for your tourist dollar at this safari? If you’re in the wrong place at the wrong time, you might get your neck licked by a giraffe.

Cute, huh? Maybe the video version will temper that cuteness with a bit more of the practical discomfort over how big this thing’s mug is:

Want to know what else happened at Out Of Africa? We finally saw a grizzly bear! No bear spray required. In fact, this guy was as docile and lazy as they come. Mitch instantly felt a bond. 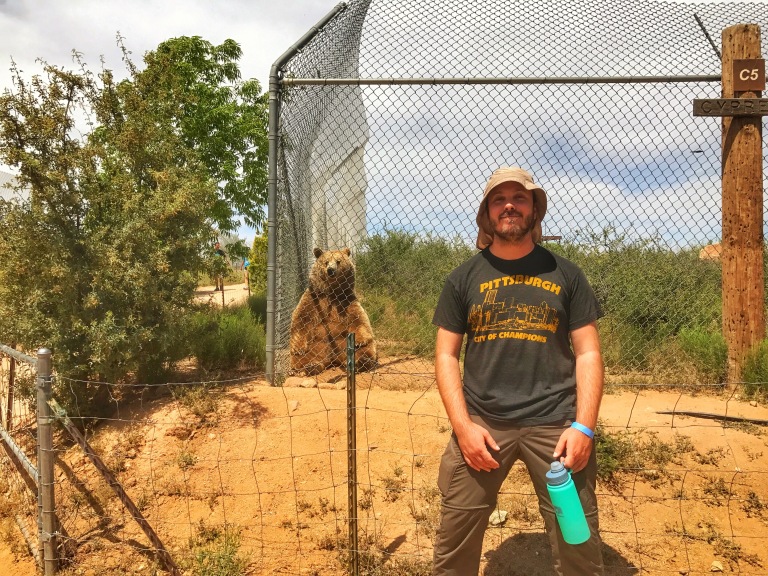 On to Scottsdale, the most well-heeled suburb of Phoenix. For those keeping track: to this point, we’ve had only one night in the van that was too hot for comfortable sleeping, and it was this very evening before we got to Kim’s house in Scottsdale.

Hailey’s extended family continues to be most gracious in their guest hosting. Props to Kim, lover of horses and owner of Rogue Trip Pit Stop #15!

Honorable mention goes to her two pups, who only had to be caged up because they were too darned friendly and also may have knocked over the television in all their excitement.

Kim took us to a bunch of great eatin’ spots in the area, one of which was Janey’s Coffee House — staffed by a couple of nice gals who gave us some tips on nearby things to do, including this:

It’s a lake in Arizona! Bartlett Lake, to be specific, and Rattlesnake Cove in Bartlett Lake, to be painfully specific. Mitch of course did not go in because the word “rattlesnake” was in the name. Hailey was in before Mitch could explain why he wasn’t going in. Great reco, employees of Janey’s!

They also told us about a park nearby where we can kick back, which Hailey took quite literally:

Mitch then brought it home with the inevitable punchline — hopping into the hammock and immediately breaking it loose from the tree. One too many ice cream cones, it appears.

We also got the chance to meet up with some of Scottsdale’s finest and funniest proprietors — Michael and Sue, friends of Mitch’s dad from back in New York. They now live out here and own Rocket Fizz, where they loaded us up with taffy and sodas of questionable flavors! 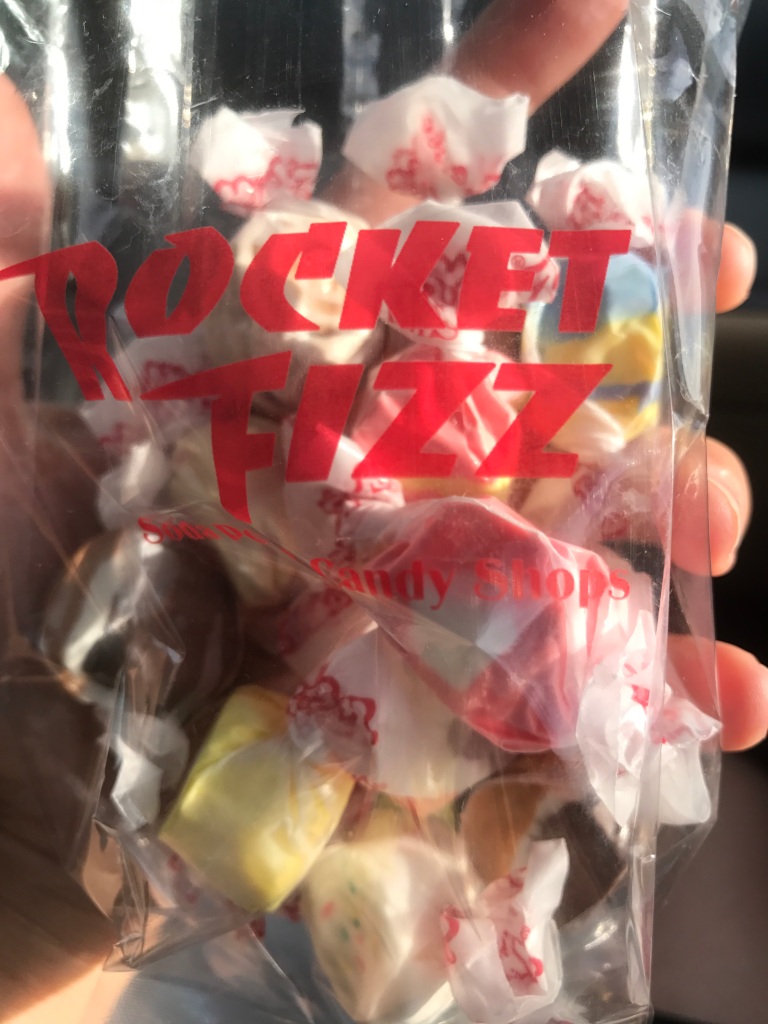 If you’re anywhere near Scottsdale, or if you have a Facebook like to spare, you should check out Rocket Fizz… if for no reason other than to see what Michael and the employees will do next.

And goodnight. Gladly from the comforts of an air-conditioned room, and not out here. But it sure looked nice.

As the sun sets on our time in Arizona, we head west to California with an achin’ in our hearts and a butterfly in our windshield wipers. Odie has seriously turned into a mass murderer of insects. 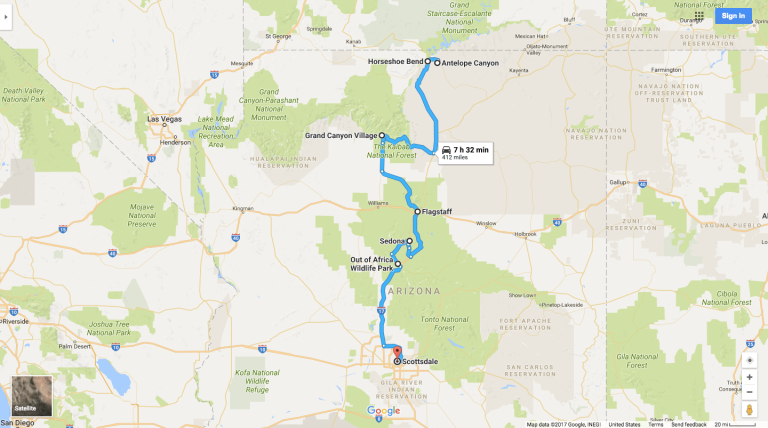