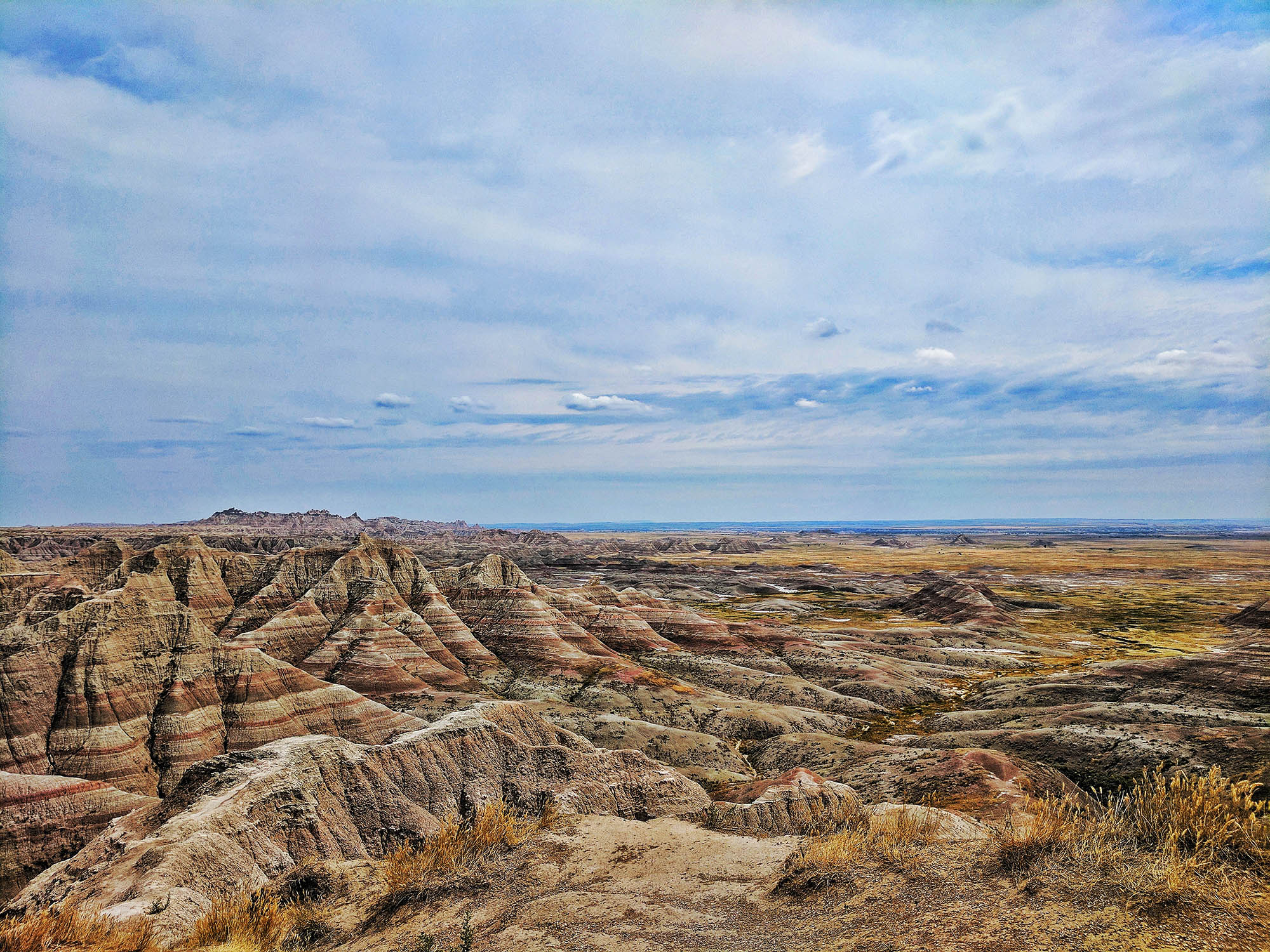 True flyover country is upon us, and that heat wave is still giving chase… welcome to our pedal-to-the-metal leg of Rogue Trip: South Dakota, Nebraska, Iowa, and about five steps into Illinois for good measure. It all starts in South Dakota’s Bella Fourche (Creme Fraiche as Mitch kept calling it) — geographic center of America.

Quick clarification for those who keep up on our Instagram or have since seen us in person: yes, we are writing this from a future where we’ve already completed our 2017 journey! We came back just for you.

Sturgis is the first memorable thing you’ll hit once entering South Dakota, and assumedly most of you know it as the home of the world’s most prominent motorcycle rally, attracting half a million people every August. Get there three weeks prior, and you’ll find six people.

Rolling into town at 9pm, we were immediately confronted with the reality that all of the local establishments were bars, and none of the bars were serving food. On our fourth attempt, we struck gold: chicken finger baskets and beer for everyone! We sat quietly and listened to the gruff bartenders commiserate over life’s great struggles, then we bolted to avoid pissing anyone off with our sissy ways.

So, where to sleep? Not here, that’s for damn sure. We rolled on to Rapid City, then started the following day with a trip to Mt. Rushmore.

You’ve all seen Mt. Rushmore, so instead, we’ll show you a few behind-the-scenes shots — lest you think these four POTUSii are just chilling on a secluded mountain somewhere.

Nope, rest assured there are miles of tourist traps leading up to a very fancy and very pricey experience. Don’t feel slighted though; this was the monument’s entire purpose from the get-go. A roadside attraction to drive revenue, dreamt up by some New Yorker during an expedition… and as was the style at the time, a healthy dose of screwing over Native Americans to make it all come together.

If you prefer not to get scalped on the $20 parking fee, you may find the view below more wholesome, if also more distant: the four prezzies coming into view as you pass through this tunnel in Black Hills National Forest.

If you wonder why 500,000 bikers converge on Nowheresville, USA every year, wonder no more: the Black Hills boast miles of magnificent roads. Pictured is Peter Norbeck Scenic Byway, and it gets our vote for America’s best slow road. 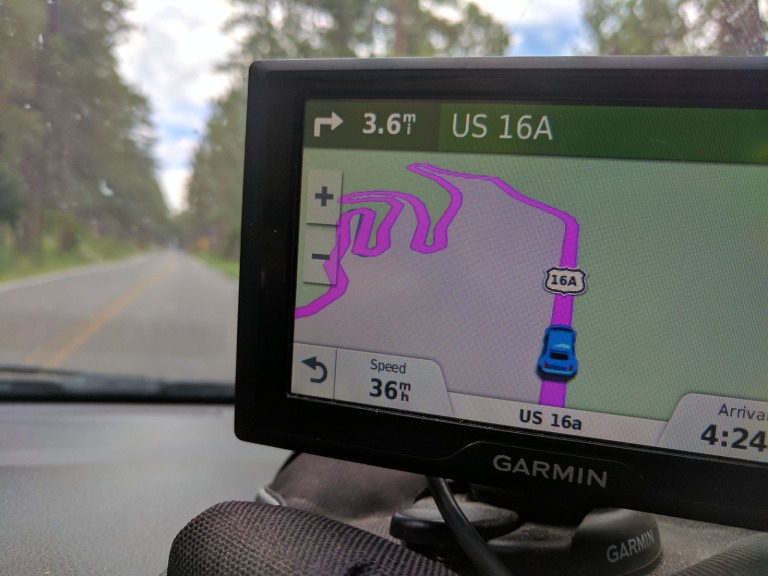 Needles Highway will also do the trick:

Black Hills: hop on your hog and get here! Learn more about this area and other gems at TravelSouthDakota.com.

And what of Rapid City itself? A rather humble 75,000 people call it home, and during these hot summer vacation days, they all pile into an even more humble town square. Unshakably quaint though! 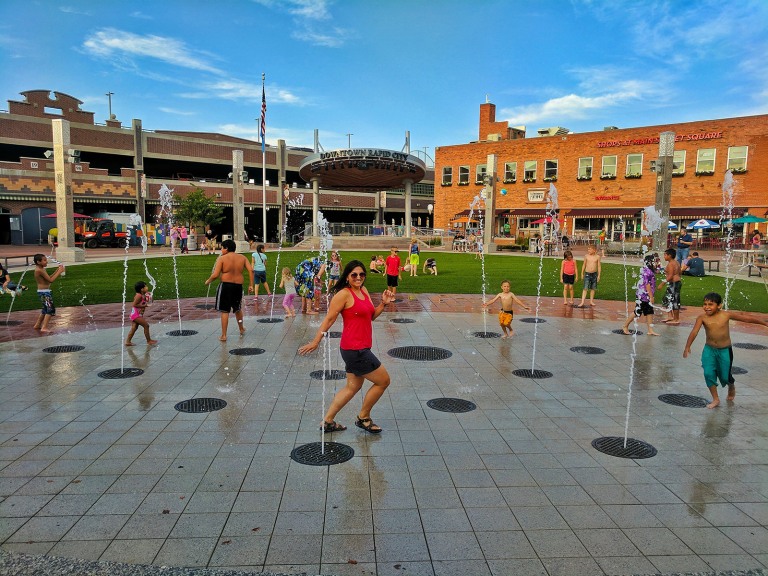 Carrying the presidential theme, you’ll find them embronzed on many a downtown street corner. This one looks like Theo Roozy, which would mark like the ninth time we’ve mentioned him on our blog… but judging by Mitch’s level of interest in composing this photo op, it must be a flattering representation of Taft.

Something we didn’t expect from Rapid City was this graffiti alley. Commissioned vandalism has become quite the trend in cities trying to make a 21st century comeback. Absolutely no complaints about that. 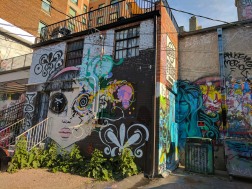 Our nightcap included a classic Great Plains thunderstorm, which is far more interesting when the top of your van is one of the tallest structures for miles.

Now, a shiny nickel for any geography nerd who knows what comes next on a trip through the more equatorial of the Dakotas. Here’s a hint: it’s unforgiving as hell, and has a similar landscape. 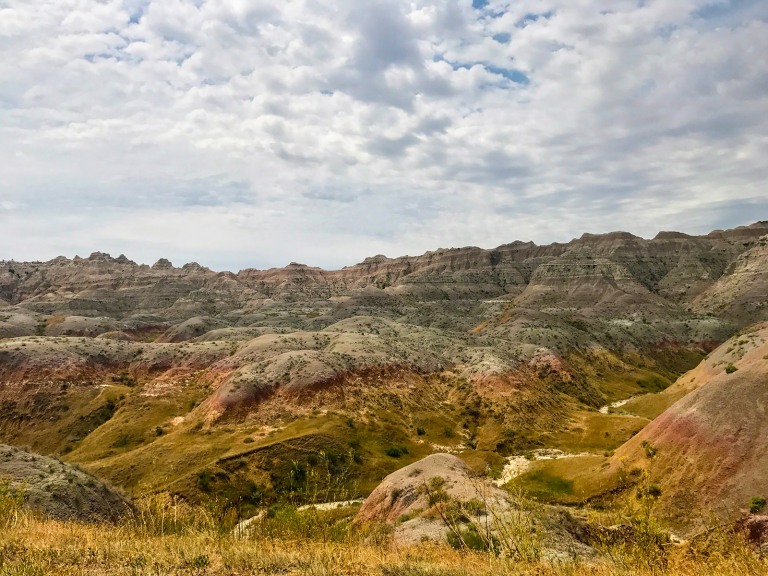 Badlands National Park! Keeper of some of the world’s richest fossil beds, and subject of many a poetic quote from such famous grizzled old timers as — you guessed it — Theodore Roosevelt. We, on the other hand, register much lower on the Grizzle-O-Meter, and at this point also quite sweltering from the lack of A/C, so this is all the scenery you get from the Badlands. The theme stays pretty consistent, to be fair.

Despite the region’s reputation for long hauls and extra-large states, we crossed most of South Dakota in one six-hour schlep. Weaving through Badlands, we followed up with a moment at the Minuteman Missile National Historic Site — a reference point for one of America’s underground nuke sites, and a museum telling the story of nuclear war. 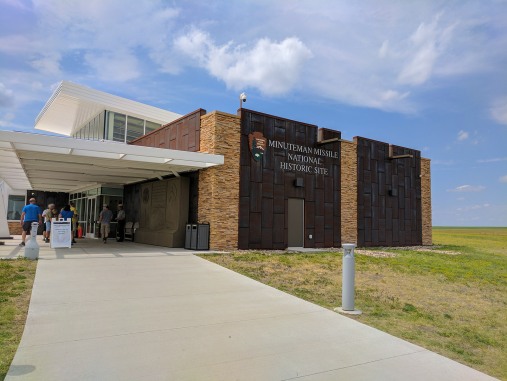 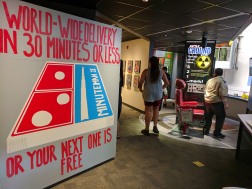 But the biggest bombshell was this little girl boasting 19 Junior Ranger badges on her hat! The bar has been set. Hailey’s gotta beat that nine-year-old at her own game.

Between this historic site and the state’s eastern terminus of Sioux Falls, there ain’t much to lay eyes on… oh, except a palace made of corn. The Corn Palace.

What’s inside? You already know. Lots of jokes about corn, serious statements about corn, and corn-based trinkets. Corn ain’t no fool.

Hey, we made it to Sioux Falls… and apparently we forgot our Corvette? 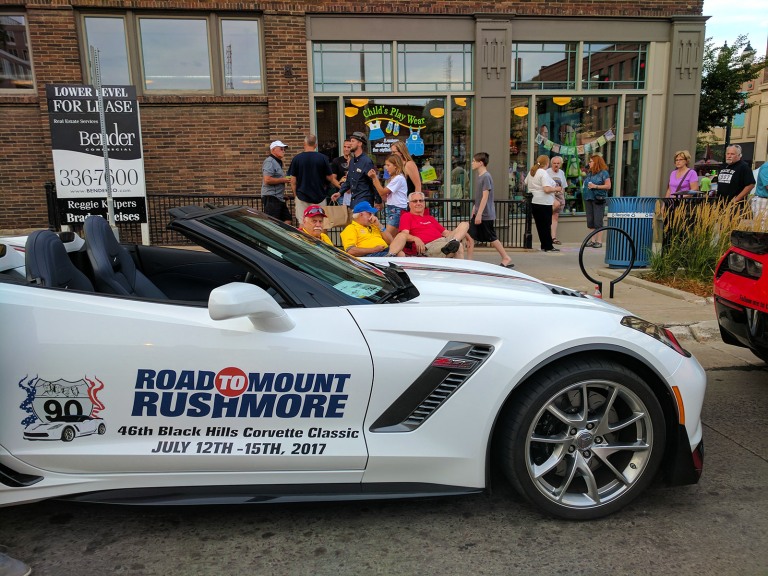 For all our planning, it’s been a blast to absent-mindedly stumble upon these kinds of community events throughout our great nation. This one happens to be the largest gathering of Vettes in the world, and much like Sturgis, these folks are all itching to drive those wonderful Black Hills roads a few hours back west. 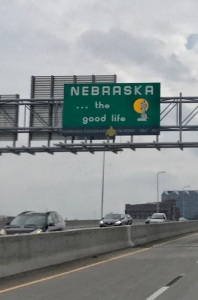 In a literal sign of things to come, Nebraska’s welcome sign was in the middle of the highway rather than the side, so we couldn’t do the things people usually do with those signs like stop next to them or take a decent photo of them.

Since we were only dipping into Nebraska en route to Iowa, our time here was enveloped entirely in its largest city, Omaha. They’ve got a cute rally cry claiming “We Don’t Coast”, and the helpings of good food and quaint neighborhoods that any city in America might offer… but what Omaha had that we found nowhere else was: an embarrassment of poor user experiences. Take the welcome sign as Exhibit A, whose choice of font also makes it read like “NEBAASKA” from this distance, by the way.

Exhibit B: this is how all the tree lights were strung up in Heartland Of America Park. That’s eyeball-height, for reference.

Exhibit C: our meter only took quarters. The meter immediately next to it (see Odie in the background) took quarters and a tiny specialized parking card. The meters a block down only took credit cards. All of them spelled “Sundays” with an apostrophe. 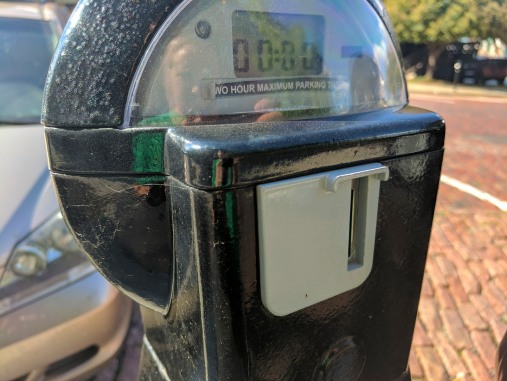 Exhibit D: bathroom stall doors that don’t close because the hardware wasn’t properly installed. The yellow door actually locks you in if you use it, while anyone outside could push the door in on you. Again, we spent less than 24 hours in Omaha — we didn’t have to go searching for this kind of buffoonery. It came to us. 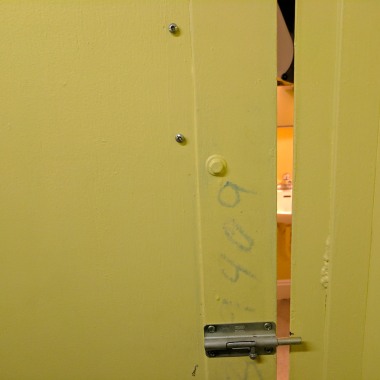 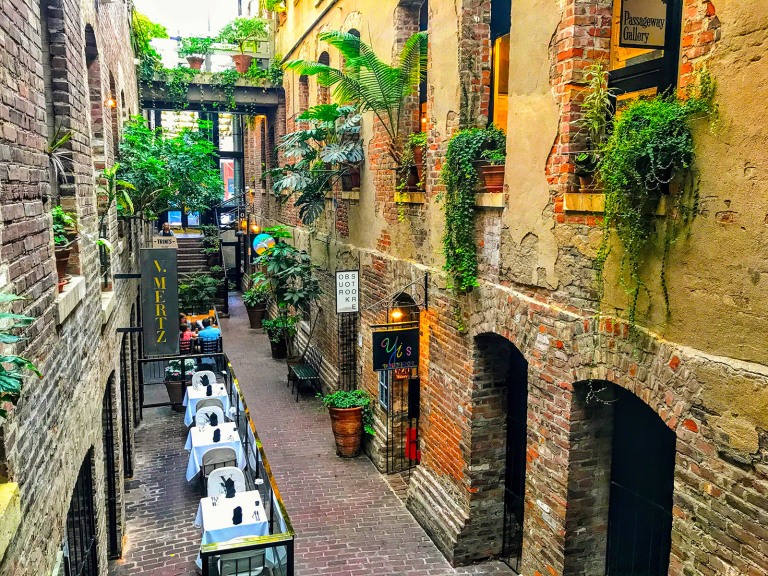 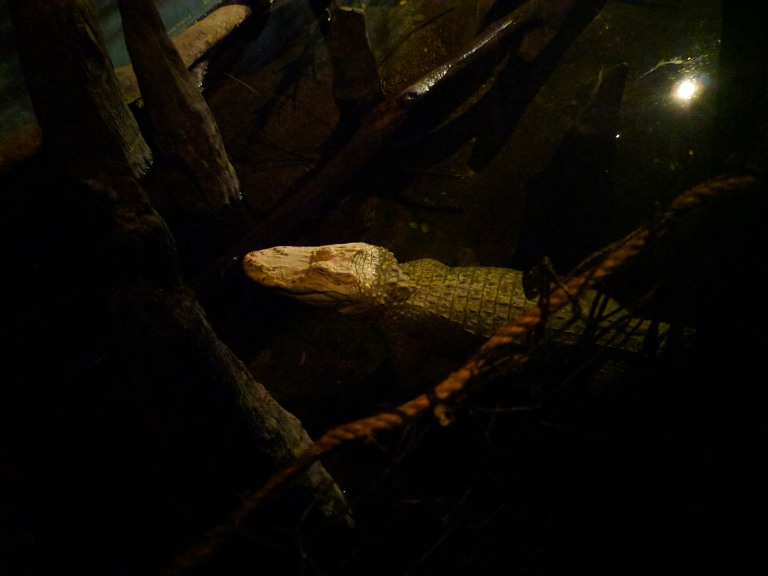 Iowa was to be our last state to plow through before vacation ended, so we weren’t expecting to squeeze much out of our time here. Turns out, we’ve got friends in town! More on that later. First stop: Des Moines.

Pappajohn Sculpture Park is one of the city’s activity hubs, and though it’s small, it doesn’t shy away from creeping the kids out with Tim Burton-esque characters.

Hot tip: Des Moines’ Akebono Sushi is actually damn good! Where the heck do their fish come from? Wonders of the 21st century abound. The acclaimed Tacopocalypse, however, was not something we’d recommend to anyone who has eaten decent Mexican grub. If Guy Fieri enjoys it, that’s reason enough to walk the other way.

Our night in Des Moines was the most sweltering to date — so much so that we not only failed to fall asleep at all, but at one point passed out and realized that was a moment of heat exhaustion rather than actual rest. Ok, bad idea. We turned the car on, rolled down the windows, and drove around to feel some semblance of a breeze. That tears it! We’ve gotta get this A/C fixed.

Thankfully, we found out that our next couple of days would be spent inside real homes with real beds. The first was located on the border of Iowa and Illinois in a section called the Quad Cities; the only place where the Mississippi flows East to West. One of those Quad Cities is the 650-resident nook of Cordova, Illinois:

And… three of those 650 residents are Heidi, Vic, and Hallie! Pit Stop #23, pictured here with Mom and Pop to boot! 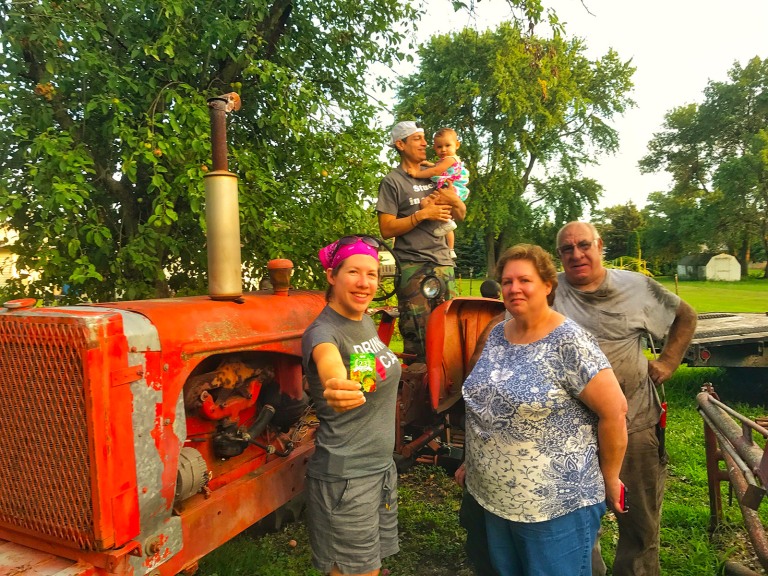 Now this is a true Rogue Trip miracle. Hailey lived in Maui five years ago, at the same time Heidi and Vic were honeymooning there. One night at a local hangout, Hailey jumped in with these two strangers to sing one karaoke song, and never saw them again. But they became friends on Facebook, and once Heidi learned we’d be heading through their neck of the woods, she literally demanded that we show up and get the royal treatment.

What’s the royal treatment look like in Cordova, Illinois?

A backyard bbq feast, baby antics galore, a gift basket with a pillow-sized bag of popcorn and a local candy shop t-shirt that increased Mitch’s shirt options by 20%, and the reassuringly manly feeling of being handed a Busch Light by a guy who is covered in grease from hard work, and by way of the transitive property of grease, has now made Mitch feel like a hard worker too. 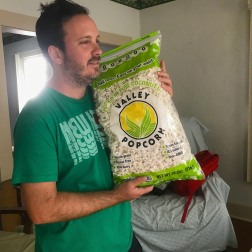 What a great gesture from a great fam. One of the best Rogue Trip memories, bar none.

After they served us breakfast the following day (of course they did), we made haste for yet another connection in corn country. En route, we briefly stopped to get a bird’s eye view of the great Mississippi River, where Hailey tried in vain to get a honk from the train conductor:

We’re running out of Iowa real estate… where could this friend of ours be??

Just about 20 minutes south of the Minnesota state line, you’ll find some actual hills encompassing the village of Decorah. It’s certainly an unusual sight in Iowa, but not as rare as seeing Hailey’s old coworker Martin who spent his past months biking down the West coast! He’s back home with mama Norma and pup Maybe for Pit Stop #24:

We weren’t about to turn down our second backyard buffet in 24 hours… the uber-gracious Norma even sneakily did our laundry while we were out touring the town with Martin! Another awesome family in the books. 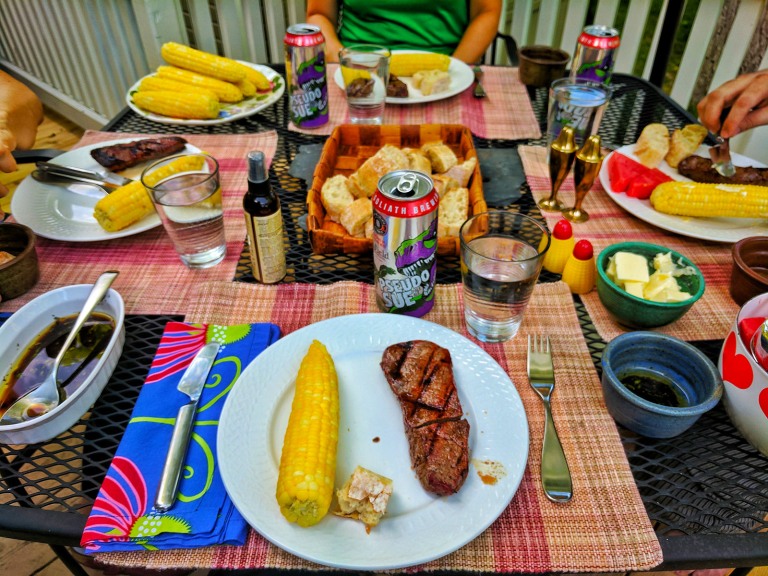 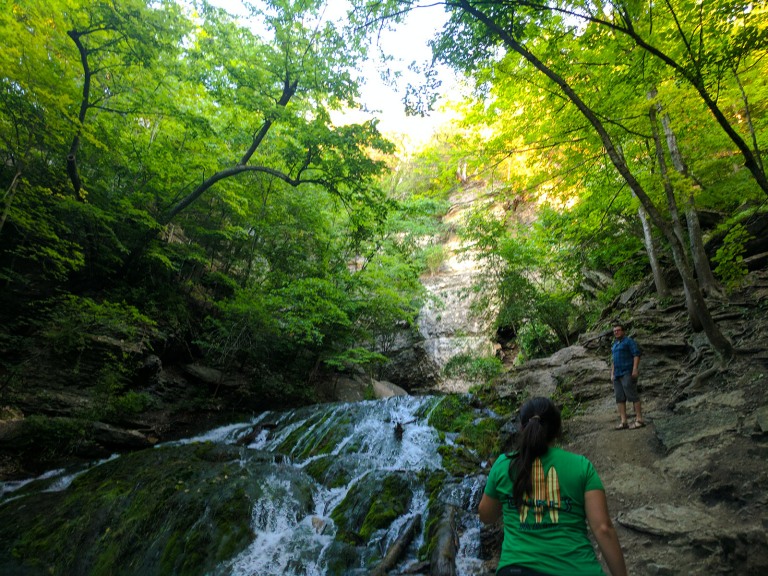 Nature lovers may think the name Decorah rings a bell… it’s probably because of their incredibly famous Eagle Cam, which gets millions of views — probably more ever since that time an eagle dragged a cat up to the nest. Luckily, we caught a glimpse of them sailing through the air live:

And checking out what they’re doing on camera at the time of this blog post… well, that’s creepy.

Ok, thank you Martin and Norma! We’re off to Minnesota and the next blog post. As always, you can see into the future by checking out our Instagram feed.